A Big Idea in a Small Town 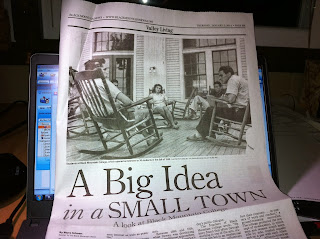 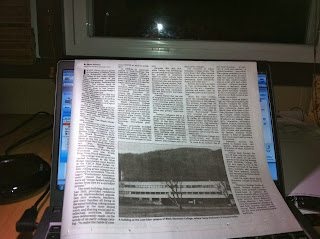 A Big Idea in a Small Town
by Myra Schoen
Published in Black Mountain News:
January 2, 2014


In 1933, Hitler came to power in Germany. Franklin Delano Roosevelt was elected president of the United States. The economic chaos of the Great Depression prevailed around the globe. Families lost homes. The jobless stood on bread lines, not assembly lines. Children went to bed hungry every night, and awoke hungry again each morning.

Not since the Great War and the flu epidemic of 1918-1919 (killing an estimated 50 million around the world) had such darkness, fear, and loss of spirit pervaded the planet.

But in a small town in North Carolina, an idea – an extraordinary dream – was taking root, and the results would eventually transform education, the arts, and culture for generations to come.

That idea was Black Mountain College.


The college was set up in two rented buildings at the Blue Ridge Association (now known as the YMCA Blue Ridge Assembly) just south of town on a hilly, rolling green campus surrounded by mountains. The College’s “Preliminary Announcement” stated that buildings were all “steam heated and protected from fire by a sprinkler system.”


The main building, Robert E. Lee Hall, provided residence for an unprecedented population mix: students, teachers, and their families all living in the same building, taking meals together in the main dining room, and sharing social and intellectual activities. Efforts were deliberately made – in the words of an early College catalog – “to make the fields of common interest as wide as possible.”


In addition to classroom spaces in both buildings, the 1,600-acre campus offered a separate gymnasium, eight tennis courts, outdoor swimming pool, playing field, and, not far away, a golf course and lake for water sports and canoeing.


The College’s American founders soon welcomed artists Josef and Anni Albers from Germany’s legendary art school, the Bauhaus (which closed in 1933 under pressure from the Nazis), along with other exiled European luminaries.


Those principles included respect for diversity and the importance of critical thinking. Dewey advocated that an individual’s abilities, interests, and cultural identities should be valued and encouraged to blossom.


Between 1896 and 1916, while Dewey was developing his nontraditional approaches, the priorities of America’s state-run public schools were geared to prepare students for vocational roles and dutiful citizenship. A liberal thinker, Dewey believed that the threat to individuality and diverse cultural identity put local community life and democratic participation at risk.


Dewey feared that the rise of corporate power and private wealth that drove the uniformity of American public schools created a separation of classes, in which the rich and powerful only had access to higher education and greater opportunities.


Dewey’s influence led to a growing national movement of progressive educators in the 1920s. At that time, while the dominant educators supported “scientific” intelligence testing and cost-benefit management, the progressives countered with methods that embraced creative and critical thought, artistic expression, and individuality. Prophetically, that debate still remains part of today’s public dialogue.


The founders of Black Mountain College wrote, “We have found that often through working in one of the arts, students are led to an intellectual awakening more effectively than in any other way.”


At first, there were no plans to train professionals in the arts, but the arts – dramatics, painting, and music – had “an important place in the curriculum.”


Much has been written about the trendsetting artists who spent time at the College – film director Arthur Penn (of “Bonnie & Clyde” fame), choreographer Merce Cunningham, composer John Cage, architect Buckminster Fuller (who invented the geodesic dome), painter Robert De Niro Sr. (father of celebrated actor-director Robert De Niro), and many more. Yet even more significant than the influences of these artists, the College generated a greater impact on contemporary culture and the academic life.


Black Mountain College was faculty-owned and faculty- governed, with students having “a voice in all matters that affect their interests . . . in matters of work and conduct,” a ground-breaking innovation. The College promoted the concept of co-education, in which men and women would learn side by side, treated equally and on a par with each other; recruited African-American students, a landmark breakthrough; encouraged outdoor and sports activities “suitable to the environment”; and even grew its own food crops for the college community.


Seeking to focus on individual, self-directed education, the founders replaced the undergraduate divisions of freshman, sophomore, junior, and senior years with a pair of two-year divisions: Junior and Senior Colleges. Junior students were offered a wide spectrum of subjects: art, biology, chemistry, dramatics, economics, English, French, German, government, Greek, history, Latin, mathematics, music, philosophy, physics, and psychology. As seniors, students would choose “a field of specialization” to be supervised by one or more tutors.


Academic success was based on student work – not grades – which was judged by professors of other, outside institutions.


Looking back through the lens of time, with the perspective of eighty years, we can only marvel at the idea that became Black Mountain College. We can only stand in awe of the dreams and work of the founders, teachers, and students, that have endured, inspired, and enriched American education and culture.


Posted by Willow Pond Media at 5:20 PM No comments:

Willow Pond Media
Welcome to my blog. You're invited to peek inside my mind and see what I've recorded over the years. Some recordings are factual, some are fictional, but all offer deep-fried nuggets of truth.